PENN TOWNSHIP ? Two Lewistown women were injured at about 9:36 a.m. when their car veered off eastbound Route 45 near Gordons Lane in Penn Township and slammed into a tree and utility pole.

?She said she was looking out at a field to the north, and when she looked back at the road, she realized she had already veered off,? Michaels said.

No other vehicles were involved. Seat belts were used, airbags were deployed, and the driver did not use her brakes, officials said.

Both women ? a mother and daughter from Lewistown ? were transported to Mount Nittany Hospital. Michaels said the driver complained of chest, knee and leg pain, but was conscious at the time of the accident.

Fire rescue crews said they cut the doors off the Oldsmobile Cutlass Ciera about 10 minutes after the call came in.

"It could have easily been avoided," Michaels said and added that the driver will be issued a traffic violation for careless driving and/or failure to use roadway lanes for traffic.

He added that a witness who followed the women from Centre Hall told him the female driver never exceeded the speed limit, which is 45 mph.

?Speed, drugs and alcohol were not a factor,? Michaels said, but added that state police will continue their investigation. 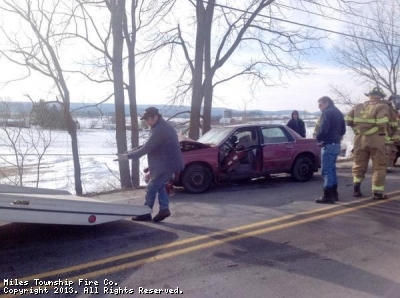 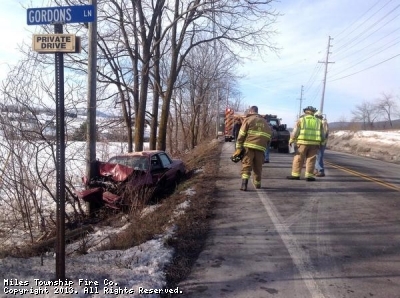 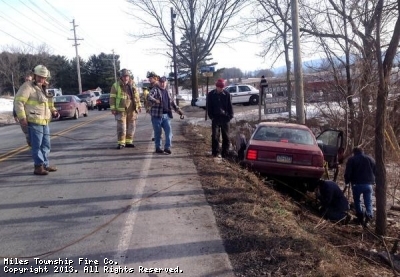 ×
1 of 62 of 63 of 64 of 65 of 66 of 6
112 entries in the Call history
Buggy Accident: 1595 W. Winter Road - Logan Twp
At 19:18 on Friday July 10, Company 19 was alerted for a vehicle accident in Logan Township. Reported UPS truck versus Amish buggy with multiple patients. Rescue 19-14 was requested by Sugar Valley Volunteer Fire Company.
➜
Vehicle Accident - Utility Pole Down: 4400 Block Brush Valley Road
At 04:15 hours on Saturday January 12, Companies 7 and 19 and Ambulance 28 with Medic 24 were dispatched to the 4400 block of Brush Valley Road for a vehicle accident with unknown injuries. Engine Rescue 19-14 and Utility 19-22 responded as well as 7-21, 28-51, and 24-47 and PSP Rockview.
➜
Buggy Accident - 5800 Block Brush Valley Road
At 17:15 on Dec 28, Co 19 was dispatched for a vehicle accident at Brush Valley Road and Back Road. 1900 and 1990 arrived on scene to find one vehicle into a buggy. 19-22 responded and MTFC personnel performed patient assessment and traffic control.
➜
Multiple Vehicle Accidents - Miles Township
On Saturday November 22, Company 19 was dispatched to three different locations for vehicle accidents and road closures due to icy conditions. Rescue crews and fire police operated on Madisonburg mountain, Rebersburg mountain, and Brush Valley Road near Livonia from mid-afternoon until late evening...
➜
Vehicle Accident - Brush Valley Road
At 0640 on Oct 1, company 19 was dispatched for a motor vehicle accident on the 4300 block of Brush Valley Road. A firefighter on scene reported dense fog conditions with a multi-passenger van into a tractor/manure spreader.
➜
Dwelling Fire - Greene Twp.
At 1133 on July 11 Engine Rescue 1914 was dispatched to 1529 E. Valley Road in Greene Township, Clinton County for a dwelling fire following an explosion. 1914 responded and Engine 1910 and Tanker 1919 were added to the box and responded.
➜
Landing Zone Operation
At 2202 on July 9 Company 19 QRS was dispatched for a trauma patient in Rebersburg. Crews arrived on scene, initiated patient care, and requested Life Flight. Engine/Rescue 19-14 was directed to establish a landing zone west of Rebersburg.
➜
Hit and Run Accident: Madisonburg Pike
At 0407 on July 6, Company 19 was dispatched for a vehicle accident on Madisonburg Pike. Engine/Rescue 19-14 responded. Assistant Chief 1902 took command. Crews arrived on scene and found no occupants present on scene.
➜
Mutual Aid: Barn Fire - Penn Township
Company 19 full house response was due for a mutual aid call for a barn fire west of Millheim at 21:35. Crews arrived quickly and knocked down the flames with minimal damage to the barn.
Mutual Aid: Building Fire - Mt. Nittany Inn
Tanker 19-19 was dispatched mutual aid to 559 N. Pennsylvania Ave, Potter Twp. at the Mt. Nittany Inn for a second alarm building fire. Units arrived on scene and were placed available by command following extinguishment.
➜
Dwelling Fire: W. Main St., Rebersburg
MTFC and mutual aid companies were dispatched to 170 W. Main St., Rebersburg for a dwelling fire. Chief 1903 took command. Crews operated on scene briefly following extinguishment of the fire and ventilation.
➜
Mutual Aid: Specialized Rescue
19-14 was dispatched mutual aid to the 100 block of Grenoble Rd., for a specialized rescue for an individual pinned under a tree. While en route the individual self-extricated and units were placed available.
➜
MVA: 4500 Block Brush Valley Road (Rt. 192)
At approximately 23:07 hours, Company 19 was dispatched to the 4500 block of Brush Valley Road for a motor vehicle accident: vehicle off of the roadway and into the field. Engine Rescue 1914 and Engine 1910 arrived on scene, along with Chief 1903, to locate a vehicle into a field with one patient.
➜
Mutual Aid Water Rescue - Howard/Beech Creek
19-14 was transferred to Station 14 Howard and then dispatched to Clinton Station 9 Beech Creek to assist with water rescue operations following heavy rains.
Mutual Aid: Structure Fire: West Aly., Millheim

Article courtesy of the Centre Daily Times PENN TOWNSHIP ? Two Lewistown women were injured at about 9:36 a.m. when their car veered off eastbound Route 45 near Gordons Lane in Penn Township and slammed into a tree and utility pole.
➜
MVA: Route 192 Article courtesy of the Centre Daily Times One person was injured when an SUV sheared a utility pole Sunday afternoon in Brush Valley. Firefighters said the driver of the vehicle was traveling on state Route 192 around 1:30 p.m.
➜
Structure Fire (Mutual Aid) - Middle Road, Haines Twp.
At approximately 6:00 AM, Companies 18 and 19, along with additional apparatus from surrounding mutual aid companies, were dispatched to Middle Road in Aaronsburg (Haines Twp.) for a structure fire. Company 18 chiefs arrived on scene to a well-involved dwelling fire; engines from Companies 18 and 1...
➜
Structure Fire: Poe Valley State Park

Article from Centre Daily Times: www.centredaily.com By Matt Carroll ? mcarroll@centredaily.com PENN TOWNSHIP ? Flames leveled an office building this afternoon in Poe Valley State Park. Park rangers discovered fire pouring from the building.
➜
MVA: Top of Madisonburg Mountain
Mid-afternoon, Co. 19 was dispatched to the top of Madisonburg Mountain for a two vehicle accident. Crews arrived on scene to find two vehicles on the roadway: tractor trailer versus a passenger car with no injuries.
➜
1 of 62 of 63 of 64 of 65 of 66 of 6
112 entries in the Call history
Picture gallery

This site has been viewed 326,735 times.
Calls
News
Events
Pictures
Apparatus
Maintained by the members and staff of Miles Township Fire Co.. Designated trademarks and brands are the property of their respective owners. Copyright © 2006-2022. YourFirstDue Inc. All Rights Reserved. Content on this web site is supplied by Miles Township Fire Co.. YourFirstDue Inc. cannot be held responsible or liable for any content, text, pictures, or any other media found on this web site.
Management login
Powered by